Pegrum Limited - Heating and Plumbing Services - established for over 40 years

A client Mr S wanted to replace a cooker as it was inefficient and hard to maintain, especially as he is away frequently.  As the property was being totally refurbished and space was an issue we resolved this by fitting an external condensing oil boiler with a fire rated bunded oil tank. In addition, we fitted an LPG gas supply for a future new LPG gas cooker.

The next photo shows the new oil boiler with its flue raised so as not to accumulate condensate or wash back over the neighbour’s fence. The oil tank can just be seen on the new concrete base towards the road between the two houses.

The next photo shows the controls installed at the rear of a cupboard.

The last two photos show the LPG gas bottle supply, and the same supply ready in the alcove for the new cooker, with the oil boiler water pipes crossing through the rear. The safety chain and foot are in place with the LPG hose and cable left spare and ready for delivery of the new cooker. 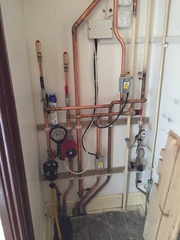 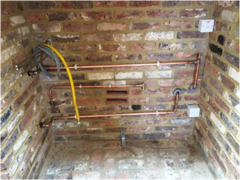